Recently I've had a need to lift my spirits.  I turned to my art - seeking a way to cheer myself up.

Purloining Shakespeare, I know, I know... boo.  My excuse?   In attempting to describe my fascination with words, this is the phrase (completely out of context) that came to mind.

No surprise then that MOOs and word art make regular appearances in my art journal :-) 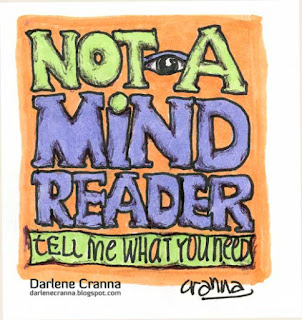 When is comes to word art, I also have favorite words such as solitary, peculiar, singular, absinthe, twirl, woof - I could go on... but goodness, I won't.  Why some words are more appealing than others?  Possibly it's simply the look of the letter combinations, the sound of the spoken word, the denotation or connotation of the word itself.  Well, I love a mystery :-)

Dogs are a constant journal entry, too, because I love them.  Perhaps I ought to challenge myself to posting "a dog a day" sketch.  O, on second thought, not now.  No need to get carried away!


As I write this my sweet dog, Remy, is snoozing by my chair.  This autumn afternoon the weather is sunny and beautiful and soon we will be heading out for walkies, yay!

Posted by Darlene at 4:06 PM No comments:

Amazingly, I began my fourth art journal on October 13th.  This is the title page -


Although I have been an artist for as long as I can remember, the practice of serious daily art journaling began a year ago.  I took Cat Bennett's class, Sketchbooks: Making Art a Practice, and during the course of the class I made a commitment to journal every day.  And now, twelve months later I have three completed journals and more importantly, a daily art journaling habit, yay!

About a dog's nose?  My golden, Remy, loves to go walkies and spends the majority of the time sniffing... everything.  I have learned to take it easy, not rush, give him the time to investigate the world in his own way.  Oy, even if it involves standing about for 45 or 50 seconds while Remy is sniffing an unremarkable bit of grass or a single (!) leaf.

This activity, which is of paramount importance to my boy, deserves a drawing:


Today's MOO is a word combination that materialized in my thoughts.  I am not entirely certain what it means, but it does have to do with thinking that is not jaded by negativity: 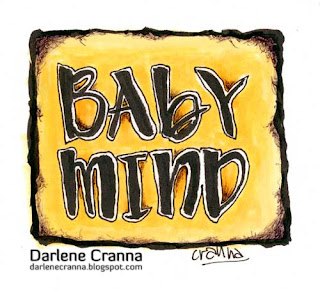 The quote is from Shakespeare - 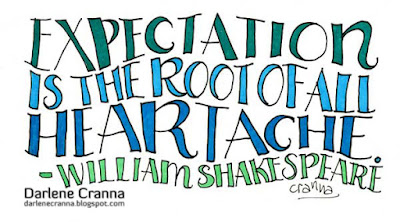 For me, reining in Expectation in its many guises has been only positive :-)

Ever have the feeling you are being watched?


I have passed by this tree with Remy an uncounted number of times - more than many - and Tuesday was the first time I noticed the eyeballs/face thing happening on this tree trunk.

I have another quote that I think is funny (attributed to Albert Einstein): 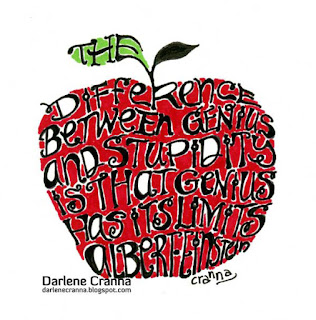 And from my art journal, some word art:

Email ThisBlogThis!Share to TwitterShare to FacebookShare to Pinterest
Labels: Albert Einstein, cranna, Darlene Cranna, hand written, lettering, OPI, Spicy, The Difference Between Genius and Stupidity is that Genius Has Its Limits, word art

Remy and I took our regular walkies this afternoon.  The weather was just lovely.  The bunnies were out in force - hopping hither and yon, in some instances right in front of Remy!  He's doing really well keeping his predatory drive in check.  While he does give the bunnies a good look, he doesn't chase after them.  Of course he  gets a nice treat for being a very good boy.  And just see the face I get to look at:


And from my art journal, a couple of things -


And this quote that I like and illustrated for fun:

Email ThisBlogThis!Share to TwitterShare to FacebookShare to Pinterest
Labels: cranna, Darlene Cranna, dog, I don't say we ought to misbehave but we should look as though we could, Oscar Wilde, Remy, sketch, walkies

I enjoy supporting fellow artists.  I love to purchase artwork directly from them or from their online shops.  Recently I have backed a few Kickstarter campaigns.  I love to hear about the progress of the campaign and the excitement of reaching the campaign goal.

My most recent Kickstarter was in support of a long-time children's book author and illustrator, Shoo Rayner.  He was looking for backing for his project, "Scaredy Cats -  Funny Scary Stories for children by Shoo Rayner."  The project was successfully funded at the beginning of August.  My copy of the book and a lot of other goodies arrived a few days ago:


I know I've mentioned a few times that I don't know much about cats, actually, hardly anything except that cats are as loved by their humans as I love dogs.  That's good enough for me :-)

These also arrived the other day - two egberts:

I don't know where I've been, but I had never heard of this kind of brush.  It was described as an elongated filbert - and I really enjoy using filberts - which enticed me to give this brush a try.  And whoa-a-a, that is an apt description.  I think they will be fun to paint with :-)


I continue to work in my art journal, daily. And from it, here's a sketch of a duiker - reminds me of a deer:

Every day begins with a warm up, usually an entry in my art journal.  It's an easy way for me to get over the perfection/judgment thoughts because in my journal I view my mistakes in a new way.

A mistake can be a challenge - can I learn from it? save it?  A mistake can be a test of my ego, in other words, am I able to accept that it truly is a mess? that it is not "fixable" and I am okay to move on.  If not, well that's just the ego at work. Oy.

A rufous rat-kangaroo (long hind legs for hopping about):


Remy inspired this MOOdle.  He snoozes in my studio, a lot.  Suddenly he will wake up, find a toy and come over and sit next to me.  He looks at me until I look at him.  He has that doggie smile and a waggy tail.  How could I not respond  :-)

From my art journal, four little bunnies exploring their terrain -

I changed the format of my art journal.  Daily art journaling has become a part of my life and I found that making boxes for the elements I included on every page was no longer necessary.  Now I put the date somewhere on the page and begin with the intent to include some journaling, a sketch, and word play.  The page is wide open and the next thing to do is start.

Encapsulating this with a MOO - 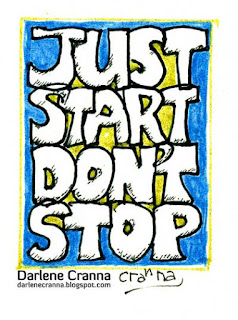 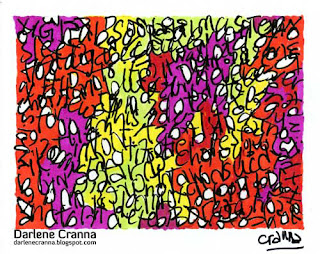 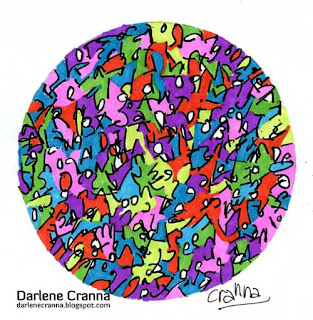 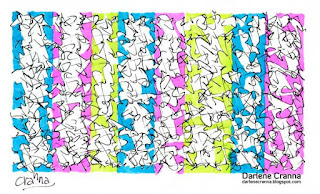 I also create doodles.  This one had its origins in a class I took from Diane Culhane a few years ago called "Doings of a Doodle" where Diane had the class do an exercise taken from Paul Klee's quote, "Drawing is taking a line for a walk".


And that day, the drink next to my drawing board was a little cup of green tea: 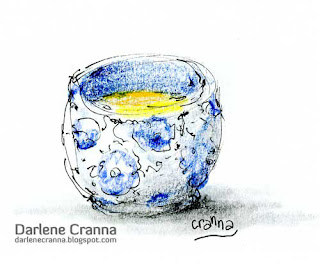 Posted by Darlene at 2:29 PM No comments:

What makes every thing better?

This question came into my brain while I was working in my art journal.  For me the answer is a golden retriever, but more generally I would have to say -


I have also begun something I call pattern journaling.  Here's an example -


The two features are random line work and color.  It's fun to create these patterns and addictive, too. 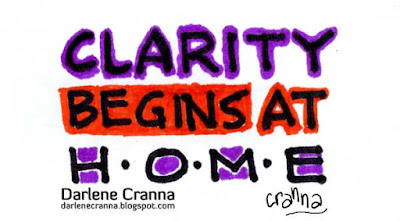 And then this one - 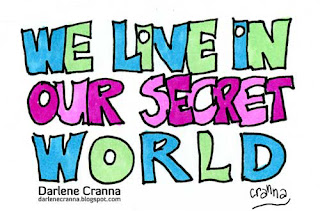 A lab face and more

Drawing dogs is just something I love to do.  Dogs have expressive faces and I just love their muzzles, the way they "pooch" out over their teeth :-)

Here's a quote from a favorite theoretical physicist and cosmologist - 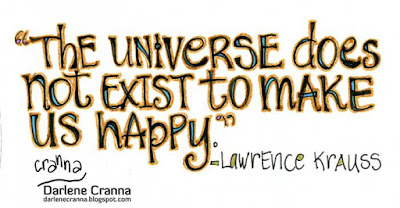 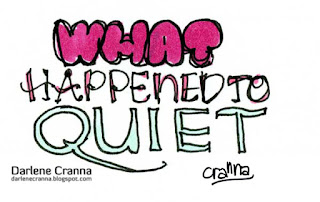 This little fox is from my art journal:


And what would my post be without a few MOOs?

Email ThisBlogThis!Share to TwitterShare to FacebookShare to Pinterest
Labels: art journal, Darlene Cranna, Did My Best?, fox, hand written, Just Because You Can Doesn't Mean You Should, MOO

I realized how odd my previous post was because there was a dearth of color.  The drawings happened to be in pencil and the MOO was in black gel pen and they all ended up in the same blog post.


I love line work and inevitably I will doodle this sort of squiggle:

This one is just for fun:


Just about anyone who draws from life and chooses one's dog as a subject knows this frustration.

And then this MOO:

Posted by Darlene at 5:22 PM No comments:

Darlene
I'm an artist living in Colorado with my husband Michael and my Goldens, Remy and Romy (dog spirit).